You are here: Home / News / Third capitol building burns down 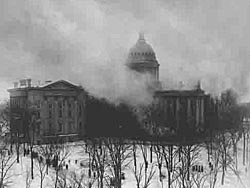 Tuesday is a significant day in history for Wisconsin.

It was 103 years ago that our capitol building burned down . Carolyn Mattern, a veteran archivist at the Wisconsin Historical Society, says by the turn of the century, the legislators had been thinking that the building seemed pretty old. “And they had created a committee to study what should be done to replace it or enlarge it, things were getting crowded and so forth. But they didn't anticipate having to do it in such a big hurry.”

Almost the entire third capitol building was destroyed in 1904, Mattern says, after an accumulation of many accidents. “Someone left a gas jet on, there was some recently varnished woodwork, the resevoir was dry and the fire quickly got out of hand.”

Until 1900 the Historical Society was located within the capitol building and Mattern says they had been lobbying for years to be in a fire-proof building. They got out just in time, preventing the loss of many valuable artifacts and other pieces of history. Losses were estimated to be close to $1-million.