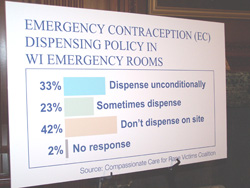 Victims of rape could soon have easier access to the morning after pill in Wisconsin hospitals. A proposal at the Capitol would require hospitals to give rape victims information about emergency contraceptives, and make the drugs available if requested. Senate Majority Leader Judy Robson (D-Beloit) introduced the bill. She says many victims of rape don't have it in their mind to ask for such drugs after a traumatic ordeal and hospitals shouldn't be able to conceal that information.

The legislation comes after a study by the Wisconsin Coalition Against Sexual Assault . It found about one-third of hospital emergency rooms surveyed in Wisconsin don't provide the drug to patients or make information available on the morning after pill.

Opponents, such as Barbara Lyons of Wisconsin Right to Life , says hospitals shouldn't be forced to dispense medication. Many groups also contend that emergency contraceptives may cause an abortion. Robson says that's misinformation rolled out by pro-life groups. She says the pill will not work if a woman is already pregnant.