You are here: Home / Politics / Govt / Bowzer tells musical impostors to 'get a job' 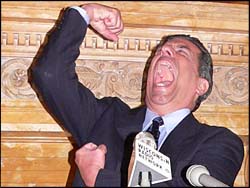 A famous figure from the '70s visits Wisconsin's capitol city to talk about consumer protection legislation.

The former leader of Sha Na Na, Jon “ Bowzer ” Bauman, says too many impostors are falsely posing as legendary groups and artists, at the expense of the authentic artists and while deceiving the audience. Bowzer calls it a sophisticated form of identity theft.

“And this kind of identity theft is really a well-worked movement now.”

Bowzer is pushing the “ Truth in Music Advertising ” bill, which states there needs to be at least one authentic recording member in the performing group in order to be legal. A violator would have to pay a fine of about $5,000 to $15,000.

Bowzer points out a lot of this old music had a very specific impact on the civil rights movement. “Consequently the people who pioneered this music are very important people in the history of this country. To watch them struggle, as I have for the past 15 to 20 years, with trying to fend off people pretending to be them, is just a heart-breaking thing.”

Bowzer stresses that specifically identified tribute groups are fine. The legislation is geared toward those trying to pass themselves off as the authentic guys, while the real deal is sitting at home losing that potential income.

“Any impostor groups need to, as Bowzer might say …” He sings a little of the Silhouettes song, “ get a job .”

(Lyrics within that song are what inspired Bowzer to name his group, Sha Na Na.)