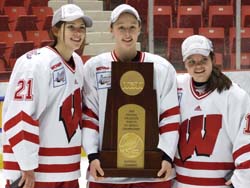 The Wisconsin Badgers did in Lake Place in 2007, what their coach, Mark Johnson did in 1980.  They won it all.

Johnson won Olympic Gold with the "Miracle on Ice" team.  27 years later, his #1 ranked Wisconsin Badgers capped off their college hockey season with a pair of wins in Lake Placid, NY, the last of which was a 4-1 victory over Minnesota-Duluth to win the NCAA's Frozen Four championship.

Four different Badgers scored Sunday afternoon as Wisconsin capped off back to back titles.  Wisconsin jumped out to a 3-0 lead before Duluth would even score a goal.  And when they did, the Badgers answered with another goal of their own some 10-seconds later and that was it.

The women's hockey team is the first UW program to repeat as NCAA champions since women's cross country won the title in 1984 and 1985.