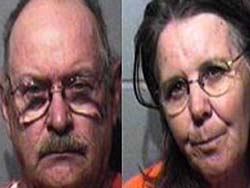 Officers from federal and local law enforcement agencies surrounded a rural log cabin home in Columbia County Wednesday to serve a state warrant. Jason Maddux, Editor with the Portage Daily Register newspaper, says the house in Rio was being foreclosed on.

Attorney General J. B. Van Hollen announced today that the couple that owned the home, Lester and Lilac Sundsmo , are charged with felony criminal slander of title for filing phony liens against individuals and public officials in Columbia County. The Sundsmos are being held in the Columbia County Jail. There were reports that the Columbia County couple are affiliated with Posse Comitatus. Maddux says the couple's daughter told him that they had no connection with that group. [ WIBA 's Jason Fischer contributed to this report. ]