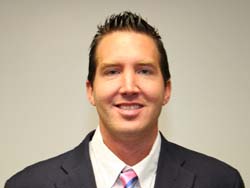 The 37 year old Tharp takes over the men's basketball program at Division II Hillsdale College of Michigan.  He leaves with more victories than any coach in program history (204).  His Lawrence University teams won four Midwest Conference championships and followed all four up with the league's tournament title.

The Vikings reached the Elite 8 of the NCAA tournament in 2004 and were ranked #1 in the country along the way.

Tharp will be replaced by Joel DePagter (pictured), an assistant at Lawrence for the last four years.  DePagter is a 1998 Lawrence graduate and takes over a team that returns four starters from a team that finished 9-7 in the league, 13-10 overall.