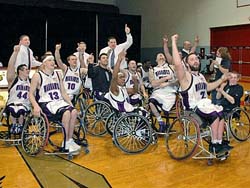 The University of Wisconsin-Whitewater wheelchair basketball team claimed it's fourth national championship trophy of the decade and 7th overall after a 70-57 win over Edinboro University over the weekend.

The Warhawks finished the season ranked #1 in the nation.  They finished 28-2 overall and 20-0 in conference play.