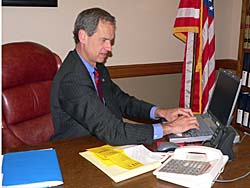 No more government mandates, unless there is money to go along with them.

That's the goal of State Representative Steve Wieckert (R-Appleton). The Appleton Republican says the unfunded mandates are problems in both federal and state government.

Wieckert says the state government quite often tells local governments what kind of programs or services they should provide, but doesn't give them money to do it.

"My bill says OK, no more. We're not going to give any more mandates to counties, to cities or to towns unless we give them the resources they need to fulfill their mission."

Wieckert says it would make lawmakers think twice about what mandates they gave local governments because they'd also have to provide the money for the program or service to be implemented.

"So that's good. It makes us reevaluate, makes better decision makers because we have to pay for all the requests that we make of local governments."

His legislation made good progress in the last legislative session, but they ran out of time. So, he's reintroducing the legislation and seeking co-sponsors. Wieckert says he's confident he'll get the support he needs to send this bill to the governor's desk.