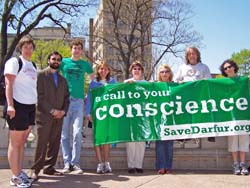 Lobbyists were at the Capitol Monday, on behalf of divestment for Darfur. Activists believe the best way to end genocide in Darfur is to divest from Chinese oil companies doing business with the Sudanese government. Branton Kunz is with the Darfur Action Coalition of Wisconsin . “Eight states have divested now,” said Kunz. “Last week, Rhode Island and Colorado divested. We're talking about hundreds of billions of dollars . . . and that has a real impact.” The coalition's Sachin Chheda said over 400,000 people in the Darfur region of Sudan have been killed in over four years, and it's time for individuals and the state to step up: “they can divest their personal holdings, and we can divest the holdings of the state of Wisconsin Investment Board.”

The Wisconsin Investment Board cites a number reasons in opposing legislation , from state Sen. Sheila Harsdorf (R-River Falls) and Rep. Fred Kessler (D-Milwaukee) to divest from companies that do business with Sudan. The board's Executive Director, Dave Mills, testified against the bill last month. Mills said the bill raises several legal questions, and could require repayment of hundreds of millions of dollars by the state.