You are here: Home / News / Injuries prompt call for ban on yo-yo toy 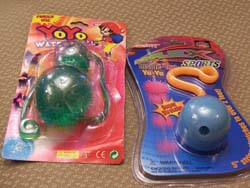 Injuries involving a popular toy could are sparking a potential statewide ban. Officials with the State Department of Agriculture, Trade, and Consumer Protection say hundreds of children have been injured nationwide by yo-yo water balls , with several cases linked to Wisconsin.

Consumer Protection's Michelle Reinen says the devices consisting of an elastic cord and a weighted ball can easily bruise or blind children, and have even been known to wrap around a child's neck. Reinen says the state should seriously consider banning the toy because several other countries have already recognized the danger and banned it.

During a legislative hearing on the bill Wednesday, State Senator Neal Kedzie (R-Elkhorn) questioned why the state should ban a product that federal officials have declined to act on so far. Kedzie cited government reports that found there was no need to recall yo-yo water balls, despite injuries linked to them. He questions what role the state should play in the regulation of equipment and toys.

The bill is currently awaiting action from a legislative committee.