You are here: Home / Politics / Govt / Toll-free hotline would receive complaints in government 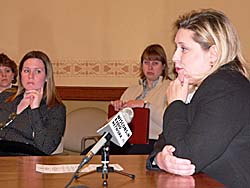 A hearing at the state capitol discusses the use of a dedicated phone line for the purpose of reporting wrongdoing.

State Senator Julie Lassa (D-Stevens Point) wants to have a toll-free phone line at the Legislative Audit Bureau's office available for citizens to report incidents of fraud, waste, and mismanagement in state government.

"The hotline would be housed over at the Legislative Audit Bureau and the fiscal impact would be minimal. It would only cost as much as one dedicated phone line that has voice mail."

Senator Fred Risser, Chairman of the Committee on Ethics Reform and Government Operations, says the Audit Bureau wouldn't have enough time or manpower to follow up on the complaints. He also questions whether the line would get clogged up by special interests, or whether it'd be obsolete in a world of email and other high tech communication. Lassa says many other states have successfully established similar hotlines.

"When a fraud or mismanagement allegation is reported, L.A.B. would then forward that allegation to either the appropriate state agency or they themselves would investigate."