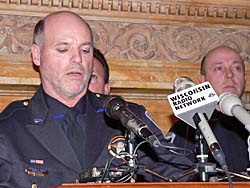 Some cops are worried about Police and Fire Commissions losing disciplinary power to a sort of “Chicago-style politics.”

Currently, Pettit says any disciplinary charges against a police officer or fire fighter are reviewed and decided upon by the PFC, which consists of five volunteer community citizens. He says the proposed language included in the state budget would allow police officers and fire fighters to appeal their discipline cases from the PFC to a state arbitrator instead of to a circuit court, which is the current appeal option.

Pettit says the Association is asking the JFC to remove what he calls a “poor public policy proposal” from the governor's budget plan. Meanwhile, the Professional Fire Fighters of Wisconsin released a statement in support of changes to disciplinary procedures for fire fighters. The Group President Rick Gale says “in a growing number of communities the PFC members have adopted the attitude that the fire chief is always right and thus fire fighters are denied a fair and objective hearing.”