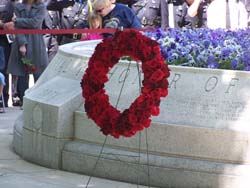 Governor Jim Doyle says their sacrifices are a testament to the commitment of Wisconsin's police force. Doyle says they represent the best in public service. He says they gave their lives to make sure we remain safe.

Ceremonies were held statewide this week to honor fallen officers.