You are here: Home / Environment / Conservation / Commerical deer not to blame for CWD, says Whitetails prez 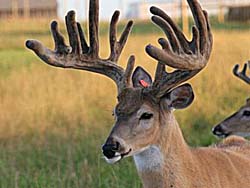 A commercial deer and elk group discusses with lawmakers the effect of CWD on its industry. Bill Vyvyan, Whitetails of Wisconsin President, clears the air on the origin of chronic wasting disease in our state. "The cervid industry was erroneously and prematurely and falsely accused of being the cause of CWD ."

Vyvyan says the cervid industry is no longer the focus of bringing the fatal brain disease to Wisconsin's deer herd, and that's good news from his perspective. He says the success of their industry is based on the perceived health of the animals. "We commercialize the animals. We sell breeding stock," etc.

Joel Espe, past president of the Wisconsin Commercial Deer and Elk Farmers, also points to their viable meet market. Espe and Vyvyan met with legislators, looking for their continued support and the support of the DNR and Ag department. Vyvyan says they don't want to be blamed for bringing harm to Wisconsin's wild deer and elk herd.

Vyvyan says the relationship with state agencies has improved in the past five years since CWD was first discovered in our state. (On February 28, 2002) Since then, over 129-thousand wild deer have been tested across the state, and about 834 were CWD-positive.