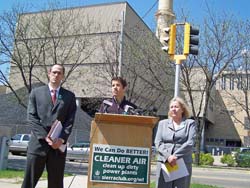 Is UW Madison “green” enough? A Sierra Club lawsuit indicates it's not. Sierra Club has filed a lawsuit against the UW, alleging that the university has continually patched up the fifty year Charter Street power plant, but has never installed modern pollution controls. The Sierra Club's Bruce Nilles said the plant is Dane County's third largest source of greenhouse gas emissions, and coal burning plants are also the largest source of mercury emissions in the county. Nilles said Sierra Club tried for a year to engage university officials in dialogue about the plant, with no success, hence the lawsuit. Madison attorney David Bender said the lawsuit seeks to have UW conform to “the bare minimum,” by complying with the federal Clean Air Act. The suit names officials with the state Department of Administration and the UW System, including Madison Chancellor Jon Wiley. The UW did not return a call from WRN, seeking comment on the suit.