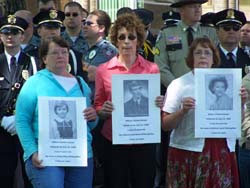 A Capitol ceremony honoring police killed in the line of duty drew protests from a family tied to the death of one of those officers.

Calumet County Sheriff's Deputy Charles Hanson was killed in July of 1968 during a vehicle pursuit. His squad car crashed into a vehicle carrying members of the McNaughton family, killing three of them. Peggy Schneider, a surviving member of the McNaughton family, says Hanson doesn't belong on the state's memorial to fallen officers. The family claims a review of the accident found Hanson wasn't on duty at the time of the crash, police could never determine who he was chasing, and the officer crashed into her family's vehicle.

Relatives of the McNaughton family stood in protest Friday during a Capitol ceremony honoring Hanson and three other officers killed in the line of duty. Schneider says their concerns have fallen on deaf ears. She says the board that awards the honor hasn't investigated the facts of the case and their attempts to lodge a complaint about Hanson's name being added to the memorial have been ignored.

Officials with the Wisconsin Law Enforcement Memorial Board declined to comment on the family's concerns, but said a review of the decision is possible.