You are here: Home / Health / Medicine / Father of autistic boy cries for help 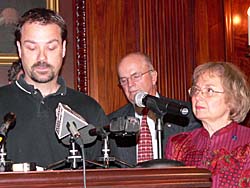 A Wisconsin dad gives reporters at the state capitol some insight on what it's like to have a child with autism. Appearing with advocates, lawmakers, his wife Sonja and his 4-year-old boy Joey, Bill Bingen compares his son's autism to a missing child. He explains, many parents have felt the gutt-wrenching feeling of losing their kid in a crowd on a busy street or in the mall, even if just for a half a second. …Panic sets in, and fear grows in that short instant.

"The power of those feelings leave you emotionally drained. My wife Sonja and I have had to endure these feelings now for more than two-and-a-half years. Our four-year-old son Joey is missing and lost. Joey has autism."

Now, Bingen says, imagine how you'd feel if someone prevents you from searching for your missing child. "The stress you felt before doesn't even compare to the trauma you feel now. That's what it's been like trying to get help for our son."

Bingen says there IS an autism treatment available, but insurance companies don't cover the cost. He says there's a long waiting list for Wisconsin's waiver program, and early intervention is the key to success. So Bingen and his wife spent their own money to help their son. Although they've seen progress, but they can only afford part time treatment, after depleting Joey's college fund.

It's estimated to cost over $3-million to care for an untreated autistic child over his lifetime. Whereas it's less than $200,000 to treat an autistic child with early intensive behavioral treatments, at a 50% success rate. "So for every dollar spent to treat a young child with autism the state would save $19 in longterm costs. It's a pay now or pay much more later scenario."

Bingen says there's a child diagnosed with autism every 20 minutes. One in 150 children in the US have autism, which is more than AIDS, diabetes and cancer combined, all of which are covered by insurance. Senate Majority Leader Judy Robson, a registered nurse, is pushing legislation mandating health insurance companies to cover autism services and treatments.