You are here: Home / Packers / Favre says he never asked for trade 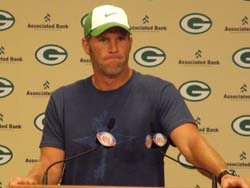 Brett Favre addressed the media this afternoon (Friday) saying, "I did want to clear up this trade issue.  A non-issue as I call it.  Never was a trade ever mentioned, requested.  I just don't know where it came from."

Favre was making reference to a report stating he had requested that the Packers trade him because of the team's inability to acquire Randy Moss in a trade with the Oakland Raiders.  Moss was instead dealt to New England in a draft day trade.

Favre also said he's alright with Packers GM Ted Thompson and that he had no problem with the direction of the team.

As Favre enters his 17th NFL season, "I jsut really didn't want to come (to mini-camp)," which he referred to as "kind of boring to be honest with you."