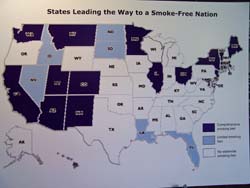 The Governor is calling for swift action on a statewide smoking ban. Governor Jim Doyle says states surrounding Wisconsin are already banning smoking in the workplace. Doyle pointed to a recently passed ban in Illinois and the signing of legislation in Minnesota this week as proof that Wisconsin is already behind in the effort.

A statewide ban has been introduced in the legislature, but lawmakers opposed to it want an exemption for bars. The Governor says he will not approve any proposal that includes an exemption, although he is open to the idea of phasing in a smoking ban for certain types of businesses.

The Governor says lawmakers need to realize that a ban will eventually pass. He says it's just an issue of how much longer Wisconsin wants to keep exposing workers to second hand smoke.

The proposal is expected to get a Capitol hearing before a Senate Committee later this month.