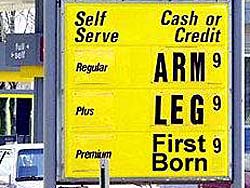 Just how high will gas prices get?

State Representative Tom Nelson (D-Kaukauna) says he wants answers, before we're forced to pay four-bucks for a gallon of gas. “It's been predicted that gas prices might go beyond $4.00 sometime this summer.”

Nelson says, aside from SeniorCare, gas prices are the top concern of his constituents. Families wonder how they're going to pay for groceries, electric bills and other essentials because of high prices at the pump. So, he did some investigating of his own.

“And I learned that despite the fact that we have relatively low crude oil prices, we are having much higher gas prices.

“It's something we need to do right now because the problem is only going to get worse. If gas prices are going above $3.00 a gallon right now, imagine what it's going to be in June and July.”

Governor Doyle has been fighting big oil for a while, saying it should not be getting billions of dollars in tax breaks while generating record profits on our backs. Doyle tried to get Congress to cap oil company profits, and give refunds to consumers. But Nelson says we now have an anti-price gouging law, which changes the legal landscape.