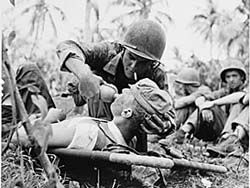 While you're having a brat this holiday weekend, grab your video camera … and a veteran.

A great way to honor our fallen soldiers this Memorial Day weekend, US Representative Ron Kind (D-La Crosse) says, is to document the stories of men and women in the military. Kind says it's simple to do.

“Just sit down with a loved one, someone who served our country in the military, and ask them to tell their story; what it was like to serve our country. Not only those who served in distant lands in periods of conflict and war, but also all veterans who served our nation during war and peace time.”

The La Crosse Democrat says the recordation of an individual's military experience for the Veterans History Project shows our appreciation and admiration for vets, but it also helps to preserve an important part of American history for future generations. Kind says being included in the Library of Congress could be the veteran's link to immortality.

“And we're also interested in receiving copies of any diaries, letters, photographs that veterans may have kept during their time in service.”

Kind says people love the idea when they hear about it, but we've got to get the word out before it's too late. He says we're losing 1,600 to 1,700 veterans every day.

“And if I had a nickel every time I had a family member come up to me and say, 'Geez, I wish I had known about this before my father or mother or grandfather, grandmother passed away,' I'd be a very rich person today.”

Kind says they do need some specific information for indexing purposes, like name, rank, where the GI enlisted, where he served and with which unit. Otherwise, he says, just encourage the veteran to tell his story. That's it. But, if you need help getting started , you can find some sample questions on the Library of Congress website.

Kind says they've archived close to 50,000 audio submissions from across the country since the federal Veterans History Project began seven years ago.

The Wisconsin Veterans Museum has an Oral History Program of its own, specializing in Wisconsin veterans. That project began in 1994 — six years before the federal program. The state Veterans Museum also shares its oral histories with the Library of Congress.

The Veterans History Project is getting some extra publicity from PBS because famous documentary filmmaker Ken Burns , who had made a Civil War documentary series, is now working on a six-part WWII documentary called “ The War ,” expected to come out this fall.