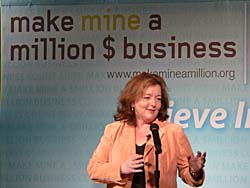 There's help for women business owners in Wisconsin to cross that million-dollar threshold.

The founder of "Take Your Daughter to Work Day" says she initially didn't get a lot of help with her new idea – Make Mine a Million Dollar Business  – to provide the resources necessary for women entrepreneurs to generate a million dollars in annual revenue.

After first testing the program to contenders nationwide, Michelle Thompson-Dolberry says OPEN decided to focus the program to participants on a statewide level, and they chose Wisconsin as the first state, because this is the fastest growing segment of the economy.

Since its inception in 2005, 16-hundred women have applied to the Make Mine a Million Dollar Business program. Hundreds of Wisconsin women entrepreneurs gathered at the Concourse Hotel Monday, seeking advice and funds.