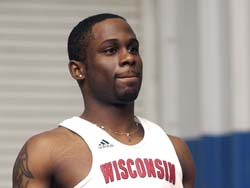 The Big Ten outdoor title was the 23rd for Nuttycombe, who is in his 24th year at Wisconsin.