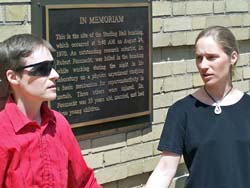 Perhaps better late than never. Thirty seven years after UW physics researcher Robert Fassnacht died in the Sterling Hall bombing , the UW unveiled a plaque in his memory Friday. Frank Scarpace was a friend and graduate student who worked with Fassnacht. “It’s reallly ironic, that someone was killed in something like this, who was probably very sympathetic to the antiwar movement,” said Scarpace, who described Fassnacht as “a pacifist.”

The bombers targeted the building where military research was conducted (in the Army Math Research Center). Scarpace’s wife Peggy persuaded him to come home that night. “He came home at 11:30, and the bombing occurred in the middle of the night,” she said. Scarpace and Fassnacht actually left Sterling Hall together, but Fassnacht returned later, to make sure all was well with his experiment. The tragedy could have been far worse: Scarpace noted there may have been as many as 15 to 20 people working in the building the night of August 23-24, 1970. In addition to killing Fassnacht, the blast injured three others.

“He was a nice person,” said Scarpace. “I missed him for many years.” Scarpace doesn’t know why it took the UW so long to recognize the sacrifice of his friend and colleague. Members of Fassnacht’s family, including daughters Heidi and Karin, attended the unveiling of the memorial plaque , but preferred to let others do most of the talking.