You are here: Home / Badgers / A big loss to the Badger family 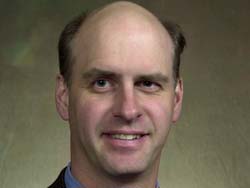 The University of Wisconsin athletic family suffered a big loss over the weekend with the passing of Associate Athletic Director Doug Beard.

Beard (pictured) unexpectedly passed away at his home on Friday, at the age of 46.  He oversaw the day to day operations for the 23-sport, $80-million Wisconsin Athletic Program.

Beard had just been named the Manager of the Year by the College Athletic Business Management Association.  He had been a member of the UW Athletic Department administrative team since 2001 and served as sports administrator for men's and women's hockey.

Beard is survived by his wife, Patricia, and daughter, Lindsay.