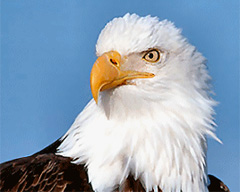 DDT contamination decades ago almost killed off the American Bald Eagle. Once the pesticide was banned, the bird started coming back, and Wisconsin played a key role in the success story. Wisconsin started bald eagle recovery efforts years ago, and Randle Jurewicz with the DNR 's Endangered resources Bureau says it went so well the state could donate young eaglets to places like Kentucky Tennessee and even New York City. The Bald Eagle is now doing so well nationwide that it can now be taken off the federal endangered species list, but it's still protected by law (the federal Eagle Protection Act) from being trapped or killed.