You are here: Home / Badgers / Badgers' Butch invited to Pan Am trials 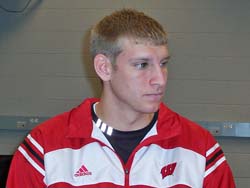 This is the second time Butch has been involved with USA Basketball, having participated in the 2002 Youth Development Festival.  Butch is one of three Big Ten players to be invited to the Trials.  Joining him will be Michigan State's Drew Nietzel and Indiana's D.J. White.  Butch is also one of two UW athletes competing for Team USA this summer, joining Jolene Anderson of the women's basketball team, who is a finalist for the 2007 FIBA Under-21 World Championship team.

Trials for the USA Pan American Games Team will be held July 12-14 at Haverford College with the 30 U.S. hopefuls participating.