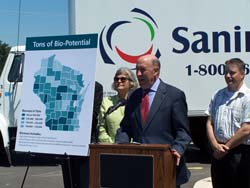 Governor Jim Doyle is calling on lawmakers to restore financial support for Wisconsin's bio-industries. That's after lawmakers on the Joint Finance Committee cut nearly $30 million worth of incentives for bio-based businesses out of Doyle's budget proposal. The Governor says Republicans aren't backing the proposal in the Assembly, with no indication it will be put in that version of the budget.

Doyle says that money could bring the state over $300 million in private investments from firms looking to develop renewable energy and produce bio-based fuels here in Wisconsin.

The Governor says lawmakers shouldn't let politics get in the way of a rapidly growing industry. Doyle says Republicans can't simply pay lip service to energy independence, while ignoring the needs of the industry to develop the technologies.

Doyle urged lawmakers to support more funding Tuesday, during a visit to a bio-diesel plant in De Forest.