You are here: Home / Environment / Conservation / Happy together? Not so for some turtles. 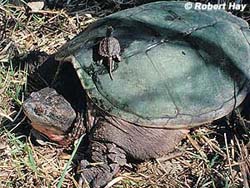 Keep and eye out on the road for turtles. Some "unfortunate turtles" these days as they make their way from lakes and streams to dry ground to lay their eggs. Bob Hay is a reptile biologist with the DNR . He says a lot of the turtles are getting killed by cars.

Hay says "highway mortality" is a major threat to our native turtle population. He's asking us to be especially watchful during the nesting season this month, and to carry the turtles across the road … if possible. Some of them are small, painted turtles, hile others are the large "snapping" variety. It's illegal to take them home for pets or to eat until turtle season opens in mid-July.