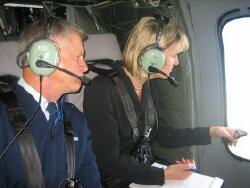 "It's amazing no lives were lost." That's what a high-ranking official says in response to viewing the tornado damage up north.

Upon returning to Wisconsin's capitol city, Lt. Governor Barbara Lawton says, "It was very sobering to see the damage and the power" of those storms . Yet, she says, she was impressed with the rapid response to open roads and restore security for residents.

"I was very proud of the level of preparation, the quick response and recovery and the progress that's being made in the clean-up."

The governor is out of the country, so for this particular duty, Lawton acted as governor and did an aerial survey of the worst damage from last Thursday's storms which included hail and five tornado touchdowns.

"My assessment is that we were incredibly lucky that it was a Thursday and not a Friday or Saturday when the area would be filled with tourists."

Lawton flew over Langlade and Oconto Counties, and spoke with area officials. Lawton praises the cooperation of villages, townships and counties, whose leaders were well-prepared due to the Wisconsin Emergency Preparedness Plan . Lawton also points out that hundreds of volunteers turned out to help.

"These communities have been remarkable in their preparation – in the way that they quickly secured an area and were able to reestablish security for the residence there and now in both the clean-up and even rebuilding.

Lawton says the biggest challenge now is to get rid of the debris, so she called upon DNR Secretary Scott Hassett to help expedite the issuing of disposal permits.

More than 300 homes and buildings were damaged in Thursday's storms, but nobody was killed or seriously injured.