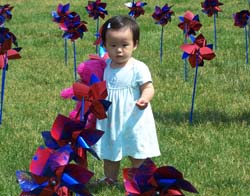 How many wind turbines would it take to power Madison? The potential for wind, solar and biomass is there, but government needs to get into the act, according to Lucinda Hohman with Wisconsin Environment . The group would like to see Congress pass a federal mandate, to produce twenty percent of the nation's power needs with renewables by 2020. Democrats in the state's congressional delegation already support the plan. The city of Madison could be powered by 156 wind turbines, and a display of 156 pinwheels near the UW Library Mall served as a demonstration of that untapped potential.