You are here: Home / Environment / Conservation / State park closes due to gypsy moths 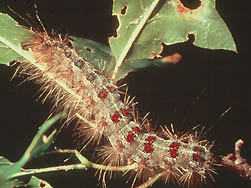 State officials close a state park due to the invasion of hundreds of thousands of caterpillars, but homeowners in Wisconsin needn't worry.

The Department of Natural Resources decides to close Rocky Arbor State Park for almost two weeks, because officials fear the tree-killing gypsy moths could hitch a ride on the vehicles of innocent campers and spread to other areas in the state. The DNR's Bob Manwell says all other state parks are OK.

“At this point in time we don't have any other infestations of this kind in any of our other state parks .”

Manwell says the immediate damage is very visible … The leaves have been literally eaten up.

“It looks horrible, but the trees are able to survive two to, even in some cases, three seasons of complete defoliation.”

DNR biologists expect the park to reopen by about mid-next week, when the caterpillars reach the end of their cycle, become moths , and fly away … but, Manwell says, not before leaving another mark.

“The caterpillars will pupate, turn into adults, which will mate, and then lay the basis for next year's population.”

Individual homeowners should not experience any lasting damage from this moth infestation. Manwell says most trees can recover from a couple of years of defoliation. ( What to do .)

“Make sure the trees are well watered if you have high-valued trees in your yard … close to the house, that kind of thing, and you notice defoliation taking place.”

If you've got concerns, get in touch with your county gypsy moth coordinator .