You are here: Home / News / Veterans' Wheelchair Games continue in the Badger state 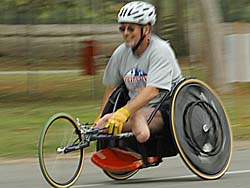 The 27th annual National Veterans' Wheelchair Games continues in the Badger state. Approximately 600 physically disabled veterans, who served as far back as World War Two, are competing in at least some of the 17 competitive events in Milwaukee, including basketball, racing, weight-lifting, swimming, ping-pong and rugby.

“And the whole point of it is to create a competitive outlet for these veterans to help them realize how much ability they still have in the altered bodies that they have.”

“After just a few minutes you lose track of the fact that they're in wheelchairs.”

Secretary Nicholson, who's in Wisconsin for the event, says it's not only about the competition and the camaraderie, but it's also a great message for other people with disabilities.

“The message that they send out … to the thousands and thousands of other injured/disabled people, to see that they, too, can get up and get going.”

Nicholson says veterans competing in the largest annual wheelchair sports event in the world come from nearly all 50 states, plus the District of Columbia, Puerto Rico and Great Britain. The events run through Saturday, and in case you're wondering, admission is free.

The Wheelchair Games are presented by the Department of Veterans Affairs (VA) and Paralyzed Veterans of America (PVA). opening ceremonies were held on Tuesday night.