You are here: Home / News / Zimmerman goes to Nationals in round 2 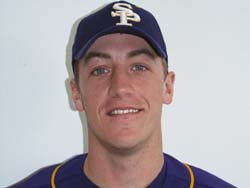 UW-Stevens Point's Jordan Zimmerman was selected by the Washington Nationals in the 2nd round (67th overall) of baseball's First Year Player Draft.

No player from the WIAC has ever been taken in the first round.  Zimmerman becomes the fourth player from that league to go in the second round two.  He joins Whitewater's Bob Wickman (1990) and Jarrod Washburn ('95) and Jack Taschner ('99), both from UW-Oshkosh to have made the jump to the pro ranks from the WIAC.

Zimmerman finished 10-0 this past season with a 2.08 ERA.  He led the Pointers to a 3rd place finish in this years NCAA Division 3 College World Series.