You are here: Home / Military / A bipartisan group pushes to restore the GI bill 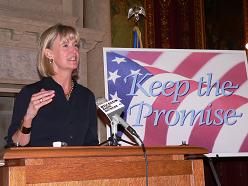 Lt. Governor Barbara Lawton says it's a matter of "keeping our promise" with veterans. State Senator Jim Sullivan, chair of the Senate Committee on Veterans Affairs, stands beside Lawton on their four-city tour, urging lawmakers to restore their cuts to the veterans Tuition Remission Program.

"We are here today to tell our veterans that we will work to fund the Wisconsin GI Bill. We must honor those who have served, not only with words but with opportunity once they reenter civilian life."

The lawmakers talked about restoring the measure to its "original intent," but what does that mean, how should that be implemented and how will it be funded? Representative Terry Musser (R-River Falls) chairs the Assembly Committee on Veterans Affairs. He says many lawmakers didn't quite understand the ramifications of the bill when they signed it, nor when they made the cuts.

Yvonne Duesterhoeft is a County Veterans Service Officer. She wasn't a scheduled speaker, but regarding the limits put on the benefits, she asked why it's fair for the current "new kids on the block" (those who served in Iraq and Afghanistan) to have this "fantastic buffet of benefits" while an equally or better qualified vet from another era (Gulf war, Vietnam) is disqualified.

Mark Grams, a County Veterans Service Officer in the audience questioned how the lawmakers couldn't know that there was no delimiting date on the benefit, when, after passing the bill, they were "slapping each other on the back saying what a great benefit it is for all veterans of all times." The budget is now before a Conference Committee before going to the governor's desk.