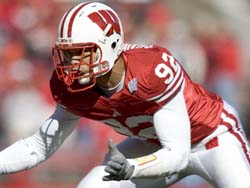 Shaughnessy (pictured) joins 27 other ends from around the country on this years preseason list.  The Ted Hendricks Defensive End of the Year Award is named in honor of college football's first three-time first-team All-American.

On field performance, exceptional winning attitude, leadership abilities, contributions to school and community and academic preparedness are some of the criteria used to determine the awards winner.  Semifinalists for the award will be announced in early November, with five finalists being announced on Nov. 26, 2007.  The Hendricks Award announcement will be made Dec. 6, with the formal presentation given at the Hendricks Award Gala in March of 2008.