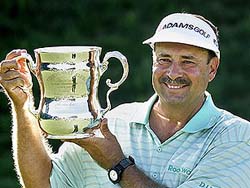 Brad Bryant (pictured) said if he played the best round of his life, he just might have a chance to win the U.S. Senior Open.

That's exactly what happened on Sunday.  Bryant fired a 4-under par 68 and saw leader Tom Watson falter on the back 9 at Whistling Straits to capture the title, the first major victory of his career.

Watson birdied 10 with a long put to go to 9-under par for the tournament and a three shot lead on Bryant.  But Watson played his next four holes in 4-over par fashion and Bryant let by 1, never to surrender the lead again.