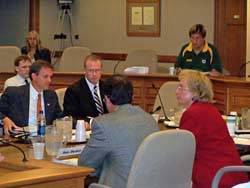 Setting the stage for gridlock? The legislature's budget conference committee held its first meeting Tuesday, and it appears as if both sides are digging in their heels. For Assembly Speaker Mike Huebsch, whose caucus put together a zero tax increase budget, the $16 billion health care plan in the Senate budget is a nonstarter. Democrats like Senator Russ Decker won't back down. “We dead dog serious on this (Healthy Wisconsin) proposal,” said Decker. Huebsch said there's a philosophical difference between the two sides. “There is an enormous gap here,” said Huebsch. “Figure out how much we are going to spend, and then we can begin to build this budget.” Representatives from Governor Doyle's office sat in on the three hour meeting of the eight member panel, that's charged with finding a compromise on the vastly different budgets passed by the Assembly and Senate.