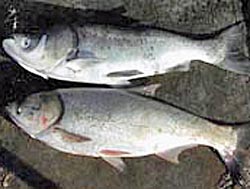 In the latest battle in the war on Asian Carp, the U.S. Fish and Wildlife Service has banned transport of the Silver Carp across state lines. Greg Sass with the Illinois Natural History Survey admits this is sort of like closing the barn door after the horse is out. “But we always need to think forward about how many other places . . . these carp can also spread to,” said Sass. “The Illinois and Mississippi Rivers aren't the only habitats that can support these species, so I think it's a crucial step in preventing transport to other places.” Other places like the Great Lakes, where the potential damage by Asian Carp has scientists like Sass worried. “If they were able to survive in the Great Lakes and reproduce, the real catastrophe would be cutting off the bottom of the food chain . . . and also not having predators out there that could eat them at the large sizes they could reach.” The U.S. Army Corps of Engineers continues to test an electronic barrier on the Chicago Ship Canal , designed to keep the carp out of Lake Michigan. As for the carp already in our rivers, Sass says the best way to control them could be the development of a commercial market for the fish. Sass also said that developing markets for Asian Carp could help control the explosive growth of the carp populations, while putting money in the pockets of commercial fishermen.