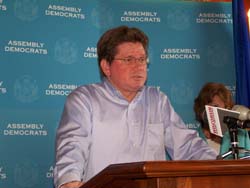 Assembly Minority Leader Jim Kreuser (D-Kenosha) says it's pretty clear why Republicans kept their budget plan under wraps until Monday. He says it's just not something that provides a bright future for Wisconsin.

The Kenosha Democrat says the plan will result in cuts to education, human services, and health care. He also believes it will result in a step backwards on the environment.

State Representative Pedro Colon (D-Milwaukee) says the Republican plan throws out much of the work done by the Senate and the Joint Finance Committee. Colon says every agreement from the committee was basically blown off by the Assembly GOP.

The proposal cuts billions of dollars in state spending to avoid tax increases. That includes nearly $96 million in cuts to the UW System, a 75 percent reduction in the state's stewardship fund, and an $85 million cut in K thru 12 education.

The Assembly is expected to take up the budget later today on the floor. Democrats aren't sure yet if they'll introduce amendments in an effort to restore some of the cut funding.