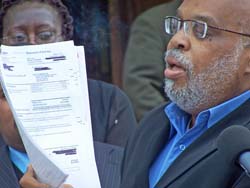 The Ministerial Alliance Against the Digital Divide rallied at the Capitol Thursday, in support of legislation de-regulating the cable industry. Group co-founder, the Rev. Walter B. Johnson, says passage of the legislation could save Wisconsin families over $400,000 a day. That's the finding of a study conducted by the Phoenix Center for Advanced Legal and Economic Policy.

Terrance Sims, Pastor of Praise Temple in Milwaukee, says the bill would increase competition in the cable industry and lower prices for many minority subscribers. Sims says minorities make up a large portion of cable subscribers, and many have to endure high cable bills because competition that would create lower rates is being held up.

But why are ministers interested in lowering cable rates?  Sims says many of their congregation members are cable subscribers, so there is an interest in helping them save money.

Opponents of the Video Competition Act says it could reduce funding for public access stations and eliminate consumer protections. The Rev. James L. Demus the Third says the bill addresses those concerns. He adds that none of those problems have surfaced in other states where similar legislation has passed.

The measure is currently awaiting action in a legislative committee.