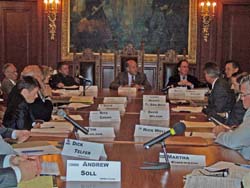 Governor Jim Doyle is joining University of Wisconsin Chancellors from across the state in blasting the Assembly Republican budget.

During a roundtable hearing at the Capitol on Monday, Governor Doyle met with Chancellors from all UW campuses to discuss the impacts of the state budget offered by Republicans. Doyle says the budget cuts $120 million from campuses, during at time when the cost of higher education is increasing.

Doyle also attacked $44 million in cuts to financial aid, saying it's a statement that only rich people should be able to go to college.

Chancellors expressed concerns that the budget cuts could lead to a reduction in class offerings and staffing at campuses across the state.

The Governor called on officials to continue their support for his budget proposals, such as his Growth Agenda and the Wisconsin Covenant, which guarantees a UW education for any student who succeeds in high school.

Doyle says investments in the UW are needed to meet the growing demands of the state.