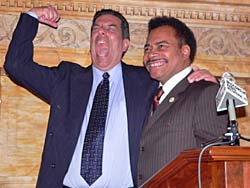 Too often musicians would perform while touting themselves as the original artists, unbeknownst to the concert-goer.

Not anymore. Governor Jim Doyle signs the "Truth in Music Advertising" legislation (SB-133), which prohibits impostors from saying or implying they are a well-known group. Violators could be penalized from $5-thousand to $15-thousand.

"In all actuality, the venue, the artist and the promoter could be fined under this law and it would be enforceable by the local district attorney or the state attorney general."

State Senator Spencer Coggs is a co-author of this measure. He says, counting Wisconsin, 16 states have signed such legislation into law, with two more right around the corner. Coggs says he's not aware of any fines being issued in other states with the law, but he says he'd much rather focus on the law being a deterrent, rather than a punishment.

In fact, Jon Bauman — or Bowzer from Sha Na Na — says the law has already had a deterrent effect in Pennsylvania. A venue had to offer customers their money back, if they wanted it, and the show had to be sold as a 'tribute show.' Bowzer, who was in Madison in March to promote this legislation, says he's grateful that Wisconsin lawmakers acted very quickly in a bipartisan manner to get this signed in time for the summer concert season.

"We're very cognizant … you know, we're not fixing health care here; we're not, you know, ending the war in Iraq, but we are solving a nasty little issue that affects a lot of people."

In addition to getting this bill passed into law, Bowzer says his next project is to focus on enforcement. He also expects to help pass this legislation in all 50 states. As for all those musical freeloaders, what advise does Bowzer have for them?