You are here: Home / News / Haas confident about his chances at U.S. Senior Open this weekend 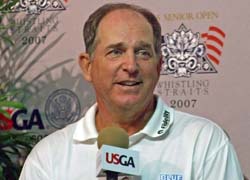 Jay Haas is a 9-time winner on the PGA Tour , but he may be playing the best golf of his career on the Men's Senior (Champions) Tour.

The 53 year old Haas has four Champions Tour victories already this year and he leads the Tour in prize money, totalling $1,796,158 in season earnings.  That makes Haas one of the favorites to win this weekend at the U.S. Senior Open  Championship at Whistling Straits.

Haas had struggled early in the decade, but a change in his putting stroke has turned things back in the right direction.  He finished 15th on the PGA Tour money list in 2003 and earned a spot on the 2004 Ryder Cup team.

Haas tees off this morning at 7:45 am, playing with Eduardo Romero and Hale Irwin.

Listen / Download – Is he playing the best golf of his career :21