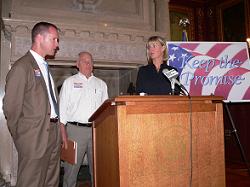 While lawmakers debate over funding for the Wisconsin GI bill, some veterans take the heat.

Key lawmakers are trying to restore recent cuts to the Veterans Tuition Remission Program. In a four-city tour, certain Republicans and Democrats joined forces, they say, to "keep their promise" about the bill's "original intent," but one Iraq veteran isn't buying it.

Michael Trepanier of Madison will be a full time law student this semester, as he makes use of the 100% free tuition benefit for veterans … or so he thought. Trepanier says, before the 2006 law even took effect, state lawmakers went back on their word and made some cuts to the benefits.

Trepanier says of the thousands of vets who got approved for tuition remission, many fall outside of the newly created ten-year delimiting date and will be turned down. He says he came back to Wisconsin because he heard about the Wisconsin GI bill, and his friends came back to the state for the same reason.

"And now, these people aren't even eligible to apply to graduate programs this fall. And now they're gonna be told 'Oops! You're not gonna get anything close to what you thought you came back for.'"

Trepanier says because of the funding debates, some veterans feel like they are stuck on an island with no friends. He says the schools don't even want the veterans because of the cost involved. Governor Doyle's budget proposal puts $11.6-million toward reimbursing veterans for their college education at UW campuses and state technical colleges, but that's since been removed. Lawton is urging lawmakers to put that back.