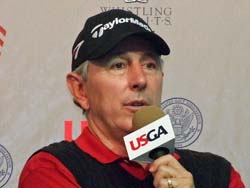 Three times, veteran golfer Hale Irwin has captured the Men's U.S. Open.  He's won the Men's U.S. Senior Open twice.  This week, he shoots for a 3rd Senior Open Championship with the start of the 2007 event at Whistling Straits in Haven.

Irwin has been one of the most successful golfers around.  His combined PGA Tour and Champions Tour earnings rank 5th among all active golfers.  Since turning 50, he's won more than $24.2 million on the Champions Tour.  He's won a total of 45 Champions Tour events.

Irwin's only other appearance at Whistling Straits came at the 2004 PGA Championship.  He failed to make the cut in that event, but he did record his 9th hole-in-one on the 7th hole.

Irwin says his game is pretty good right now and feels he has as good a shot as anybody to win the 2007 U.S. Senior Open.