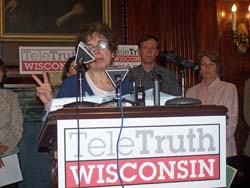 Opponents of the Video Competition Act are launching a new campaign against the legislation.

The proposal would streamline laws that control how cable companies offer service across Wisconsin, making it easier for new companies to enter a market. But opponents say it's a bad deal for consumers by gutting consumer protections, reduces revenues to local governments, and stops cities from protecting their local right-of-way.

Cynthia Laitman is an organizer of "TeleTruth Wisconsin," a grass-roots organization aimed at stopping the legislation. She says lobbyists from AT&T and the group TV4US have used deception to promote the bill. She says promises of new jobs and lower cable rates are unproven, and points to other states where similar legislation was passed and cable rates still went up.

TV4US executive director Thad Nation says opponents are just propping up an out of date system.

Nation is also defending a petition that was sent to lawmakers, which listed the names of citizens who support the Video Competition Act. However, several of those people listed have come forward, saying they never agreed to support the bill. Those include members of the State Assembly who voted against the bill.

The Video Competition Act is still awaiting action in the Senate, which many not take it up until this fall.