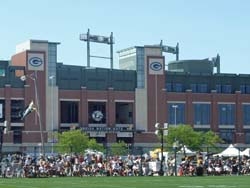 Roughly 115,000 fans will attend a Green Bay Packers training camp practice between now and August 28th when camp is officially closed to the public.  The Packers opened their 62nd training camp on Clarke Hinkle Field today (Saturday) with a single afternoon workout in pads.

The Packers will workout twice on Sunday, with the first of several night time practices to cap off the 2-workout day at 6:30pm.

All 87 players invited to camp are in Green Bay, including all of the teams draft picks, after first rounder Justin Harrell agreed to terms on Friday and was on the practice field today.

Not all of the players were on the practice field however.  Defensive lineman Ryan Pickett and Johnny Jolly were held out after failing physicals because they weren't in good enough shape to participate.  Rookie DeShawn Wynn sat out with a stomach virus and veteran receiver Donald Driver failed his physical with a nagging shoulder injury that dates back to last season.  The Packers say Driver's not practicing is more precautionary and he's considered day to day.

The teams first injury of significance came when reserve tight end Tory Humphrey was carted off the field with an ankle injury.  He was to undergo x-rays and coach Mike McCarthy said the injury looked significant.

Listen / Download – Mike McCarthy said it's great to get started. :21