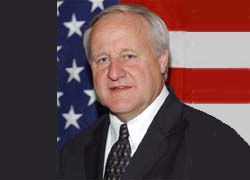 There's tragic news coming out of Green Bay today involving the death of a little girl. Wisconsin State Senator Dave Hansen (D-Green Bay) was backing out of his driveway at about 8:40 this morning when he accidentally ran over his granddaughter. The toddler, Elliana Zaidel, was just five days away from her 2nd birthday.

In a statement , Hansen said neither he nor his wife Jane, who was in the car with him, saw the child run from the house to the rear of the vehicle, as they were leaving. The statement from Hansen's office says “Ellie adored her grandfather and she was the apple of his eye.”

The statement also says that Hansen, who will be 60 in December, is in “deep shock” and is “attending to the needs of his family.” The family is asking that you keep them in your prayers at this time of deep loss and tragedy. Hansen has three children and seven grandchildren.