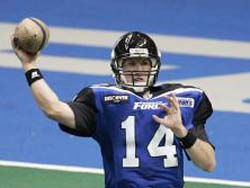 Greisen and the Force are one win away from the Arena Football League Championship game.

Greisen had a stint in the NFL with the Arizona Cardinals, and with his success in the AFL, would love to get another shot in the big show.

Greisen set a new Arena Football League record with 117 touchdown passes and has added 7 more to that total (124) in a playoff win last week.